I just spent some time updating the sample projects I provide to help Eclipse RCP developers get started with PDE Build. One of the main reasons for the update was to decouple the product configurations from specific feature versions, and I thought it was worth a post to talk about this.

Luckily, we now get feedback in the Product Configuration Editor informing us that something is amiss. 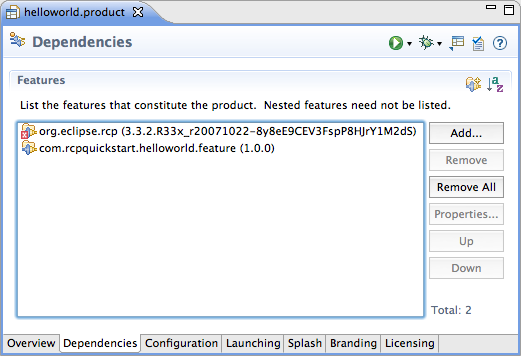 So what can we do about this? Well one approach is to re-wire your product to the new version of the feature. You can do this by deleting and re-adding the feature, or you can also click the Properties button and modify the feature version manually. But this is a brittle approach, as you need to remember to update your configuration every time a feature version changes.

Also, there is a currently a defect in the Product Configuration Editor that results in a feature version entry of 0.0.0 being ignored. Of course, this won’t matter once blank versions are interpreted correctly, but for now it’s a problem. The solution is to open the product configuration file in a text or XML editor and change it manually.

The good news is that you only need to do this once. Your product will now accept the feature versions you supply in your target platform without complaint. Of course if you want to maintain the wiring between products and feature versions, by all means do that. But it’s nice to know we can decouple these pieces if we wish.